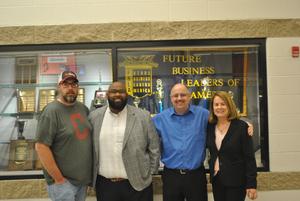 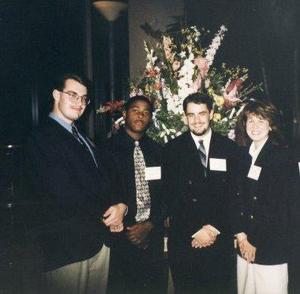 Twenty-five years ago Harvey High School business teacher Nell Rapport embarked on a new venture. Rapport wanted to start a business club at the school that would provide opportunities for her students to be better prepared for successful careers. Twenty-five years on that dream has been more than realized.

The Harvey High School chapter of the Future Business Leaders of America (FBLA) was started in 1995 by Ms. Rapport and three of her students, Larry DeBold, Chris Lillstrung and Justin Gibson affectionately known as the “Founding Members.”  Ms. Rapport, Chris, Larry, and Justin have stayed connected over the years mostly through email and social media. Today they had the opportunity to meet in person in a very emotional 25th Anniversary reunion. The reunion gave Rapport and the Founding Members a chance to reflect on the FBLA program and how it has impacted each of their lives.

FBLA is a national program that helps high school students prepare for careers through academic competitions, leadership development, and educational programs. A big part of the FBLA program are the State (SLC) and National (NLC) competitions. When Rapport and her students attended their first SLC in Columbus in 1996 they felt overwhelmed and underprepared.  That inauspicious start did not deter the vision and determination of Ms. Rapport, Larry, Chris, and Justin.  The Harvey FBLA Chapter has become a juggernaut in the FBLA program at the state and national levels and is still going strong in 2020!

Over the years, Harvey FBLA members have won innumerable 1st and 2nd place awards at the State level at the SLC which is held in Columbus every March.  Being a state champion or runner-up qualifies students to compete at the National level (NLC) held every summer in various cities.  Harvey FBLA members have been successful at the national level having had many National finalists over the years including a team of two students who won a National Championship in 2016. The Harvey Chapter won three back-to back overall state titles called the Gold Seal Chapter of Merit in 2014, 2015 and 2016.  Over the years, the Harvey chapter has fielded numerous State Officers including a state president.  In 2010 the Harvey FBLA chapter forged an impactful ongoing partnership with Avery Dennison Corporation that provides mentoring and funding for the Harvey chapter members.

The Founders and Ms. Rapport each reflected on their lives and the impact FBLA has had.

After graduating from Harvey High School, Founding Member Larry DeBold served in the United States Air Force for ten years including deployment to both Iraq and Afghanistan. Larry is currently a lead logistics dispatcher for an oil Company in North Dakota where he lives with his wife and three children. Larry also runs several small businesses of his own.

When asked about the lasting impact FBLA has had on his life Larry stated, “The things I learned in FBLA have been instrumental in my growth especially as I have grown older.  The lessons I learned in my time served as chapter Harvey FBLA Vice-president have helped me as a non-commissioned officer in the US Air Force and as a supervisor in the civilian workforce. My time in FBLA also served as a catalyst in setting the stage for the completion of my Bachelor's degree in Business Management and Graduate Certificate in Christian Leadership.  Additionally, the competitive events that I took part in individually and as part of the Parliamentary Procedure team at the state conference helped prepare me for the reality of adult life: that there is no such thing as a "participation trophy".  The only way to get ahead in life is dedication to your craft and hard work.”

Founding Member Chris Lillstrung has had successful career as a journalist. He graduated from Lake Erie College and has worked at The News-Herald as a high school sports writer and copy editor since 1999.  Chris was named Ohio Prep Sportswriters Association Division I Writer of the Year in 2016 and was also a four-time recipient of Division I's first-place award for best column. Chris lives in Parma Heights with his wife and daughter.

Chris says of FBLA, “It's no exaggeration to say it changed my life. At that age, I admittedly lacked purpose prior to that. Being a part of building Harvey FBLA from the ground up in those days gave me direction, and hearing from afar how the chapter has flourished since is heartening. I will forever be grateful for the base that experience provided for my journey in life, from high school into adulthood.”

Justin Gibson traveled to the reunion from his home in Cincinnati where he is the Director of Diversity Outreach and Engagement for the University of Cincinnati Foundation. After graduating from Harvey High School Justin earned his Bachelors and Masters Degrees in Business Administration.  He is active in many community endeavors including volunteering for the St. Vincent DePaul Society and March of Dimes, Phi Beta Sigma fraternity to and the Harvey High School Alumni Association. Justin and his wife Jami, who is also an alum of the Harvey FBLA chapter, are the parents of four children.

“ Many people and experiences have helped me along the way, but I can't think of any more impactful to my life than Ms. Rapport and my involvement in FBLA. We were just getting the FBLA Chapter started and Ms. Rapport, Larry, and Chris urged me to run for a State Office.  I was elected as the Ohio-FBLA Vice President my Junior year and State President my Senior year.  That gave me the opportunity to dream bigger, and gave me the confidence to do more. My story is not unique; Ms. Rapport has done that for so many other Harvey students. In my four years in FBLA, I was able to travel to Florida, North Carolina, St. Louis, Cincinnati, Chicago, and twice to California. Without FBLA those experiences do not happen for me, a poor kid from the north side of Painesville."

Ms. Rapport continues to be the Adviser of the FBLA program and teach business education at Harvey High School. Rapport has been recognized for her work with FBLA having been named the Ohio-FBLA Adviser of the year in 2003, 2010 2017 and 2020. She was recently inducted into the National FBLA Adviser Wall of Fame at FBLA headquarters in Reston, VA.  She has served on the Ohio-FBLA Board of Trustees and State Committee.  In addition, she is an FBLA Professional Division Life Member.

Ms. Rapport stated that she started the program with the hope of providing opportunities for students especially minority and underserved students.  “FBLA at Harvey High School has enabled many students over the course of 25 years to learn and grow beyond what could have been taught in a regular classroom. Based on the feedback I have received from former students over the years the impact of the program on their lives has been momentous!”

Being reunited with the Founding Members was something Ms. Rapport had hoped for for years. As the program continued to grow and become increasingly successful over the years, she never forgot about Larry, Chris, and Justin. “I think of them every March when I am in Columbus with Harvey FBLA members at the State competition.  Starting FBLA was a monumental undertaking.  Without Larry, Chris and Justin we would not have had the 25 years of success and achievement that we have had.  At our first SLC in 1996 Chris Lillstrung won the first FBLA award for Harvey High School. When he placed 7th at states in the Accounting event I was laughing and crying uncontrollably at the same time!  Since then we have had so much success, many state champions and national finalists and three consecutive overall state titles to name a few. There is a part of Larry, Chris, and Justin in everything FBLA has been and done at Harvey High School for 25 years. Without their vision, efforts and commitment back on the 1990s we would not have an FBLA program at Harvey High School in 2020!”