13 Reasons To Talk With Your Kids About '13 Reasons Why' 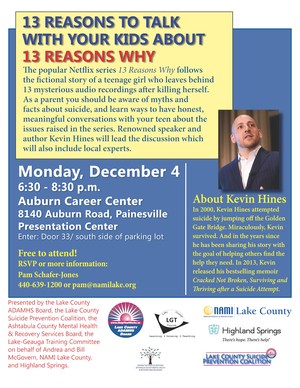 On Monday December 4, 2017 renowned speaker and author Kevin Hines along with local experts will lead a discussion at Auburn Career Center about learning ways to have honest, meaningful conversations with your teen about the issues raised in the popular Netflix series '13 Reasons Why.'

In 2000, Kevin Hines attempted suicide by jumping off the Golden Gate Bridge. Miraculously, Kevin survived. And in the years since he has been sharing his story with the goal of helping others find the help they need. In 2013, Kevin released his bestselling memoir Cracked Not Broken, Surviving and Thriving after a Suicide Attempt.

Kevin will lead the discussion around the popular Netflix series 13 Reasons Why, with local experts. 13 Reasons Why follows the fictional story of a teenage girl who leaves behind13 mysterious audio recordings after killing herself. As a parent you should be aware of myths and facts about suicide, and learn ways to have honest, meaningful conversations with your teen about the issues raised in the series.